I did an interview recently with Lynn Terry, who is someone I've “known” for a long time on the Internet (and yes, have met in real life). Lynn is one of the most genuine people I've met on the net (she reminds me a lot of Christine Churchill) and she knows her shit and works hard. The chick makes good coin. Believe it.

I spent a few hours digging through some posts on her blog and came across a post she did called “The Lifestyle and Income of a Super Affiliate” and I thought it was a neat peak into her life. Her readers know “she's successful” but she was able to show a bit of what her success- Lynn Terry style success – looks like in that post.

I get a lot of email from people either asking for help or saying that I've helped them get further in making money online (and I'm glad for those emails the most). But I also see a lot of people mention having “fear” of me or folks who assume I'm this ranting, dominant force of nature in every aspect of my life.

People know I'm successful, they might get some insight into my personality from reading my tweets. But what does success – Sugarrae style success – look like?

To me success isn't being a “baller” – it's about living my life in a way that makes me happy and on my terms.

It's being able to rent a cottage for a week to bring my friends and my children on vacation and being around at 2 p.m. in the afternoon to snap this photo (if for nothing other then proof that they actually *can* get along): 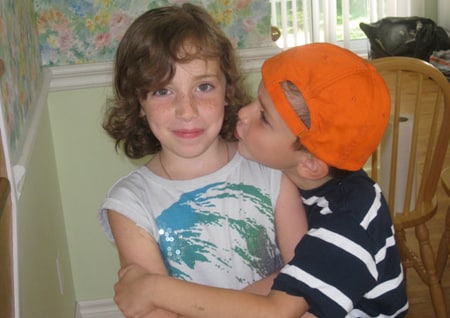 It's about taking a girls weekend to Chicago with my friends and being able to kick back and relax with my girls, sight-see and destroy a T.G.I.F. bar supply:

It's being *THIS FUCKING CLOSE* to Kid Rock: 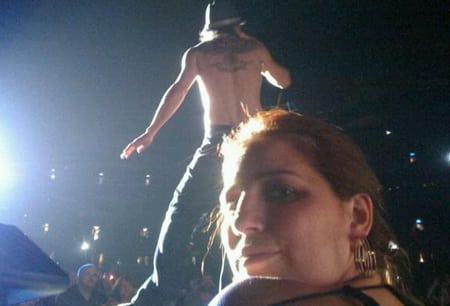 It's 11th-row seats on the fifty-yard line. It's playing pool at one p.m. in the afternoon on a Wednesday. It's throwing my best friend an amazing birthday party. It's owning 31 pairs of jeans so I always – always – have a clean pair. My style of success has nothing to do with fancy cars, bling (okay, the Rolex, but that's a long story) or keeping up with the Joneses.

For me, success “Sugarrae style” is all about being able to ENJOY my life, time with those I love and being able to share my success with those I care about. I'm a simple redneck girl who would still drink cheap beer and own a pickup truck even if I owned a billion dollar company.

And it is so fucking possible for you to have your brand of success that I want to shake the shit out of you. Making money online – be it 1K a month or 40K a month or more – is possible. It's doable. Anyone willing to put in the time and work can DO IT.

I've only discussed my personal life one prior time on my blog – in telling the story of how I entered Internet marketing. But, where did “Sugarrae” come from?

In Lynn's post, she gave a bit if background on her situation B.I.M. (before Internet marketing):

“I’ve been there. I had a low-paying job, 6 of us lived in an 800 sq ft rented house, the car was always breaking down.

It was a struggle just to make a paycheck last the week. Those were tough times, to say the least.

And I've been there. For folks who want to cite all the reasons they've been blocked from success, I'd like to say… grow a pair and take responsibility for your life. Success does not require a silver spoon.

In my days B.I.M. even keeping my bare essential utilities on was a severe struggle. My ex-husband and I were a young married couple with two kids under three (my youngest son hadn't been born yet), one of whom was severely multiply handicapped, living on one construction worker's income in a state where construction wasn't unionized, and construction workers barely made more than cashiers in a retail store.

Going to the grocery store meant doing the math for every item I put into my cart and sometimes being embarrassed when I didn't “carry a one” and had to remove a few items from my bags when the cashier gave me the final total. A night on the town every two months was either dinner *or* a movie.

If my son needed a piece of therapy equipment not covered by his state granted insurance, then it meant we ate macaroni and cheese for two months to save up the 100 dollars needed to buy it. We lived paycheck to paycheck and most times, we needed fewer days between those paychecks. I “shouldn't have” the success I do.

But like Lynn, I remember the day that I decided enough was enough. I was standing on my front porch. I looked around and went, “This is not what I want in life. This has to change.” That was when I decided to see if there was a way to make money online (until then, I had been running a non-profit website). And I decided that if there was a way, then I was going to make it happen – to quote myself – “even if someone were to tie a fucking anchor around my neck.”

And I did make it happen. I've been making all of my income online for a decade now.

And like Lynn (again), I rarely discuss actual figures online. And I agree wholeheartedly with Lynn's reasoning as to why she doesn't either:

“You’ll rarely ever see me talk dollar figures, or discuss my income. There’s a reason for that. Personally, I feel it’s irrelevant. The amount of money I need to maintain my ideal lifestyle may be completely different than your goals.”

But you need proof to believe anyone – even a redneck chick with the odds stacked against her – can do this right?

I'll give you a few examples.

A single post on Thesis built this deck and could have built three more as I've made almost 40,000 dollars in affiliate commissions from that post on Thesis (which is awesome, cause I love the theme). One post. It took me four hours to write. So, I made about 10,000 dollars an hour.

One affiliate program. Promoted on one blog. And it continues to earn.

Several weeks ago I was approached to buy a website I'd built several years ago. The website generated about 28,000 dollars a year. I paid 1400 dollars to develop the site (content, graphics, etc.), did initial promotional work and walked away. All in all, I probably spent 60 hours of my life on this site. I sold the site for 79,000 dollars.

And this isn't the first time, nor will it be the last, that I've sold an affiliate site for that type of revenue. And then I build another one in another niche.

And none of this takes into account the revenue from either of my core companies (MFE and Outspoken). These are personal sites and personal revenue streams.

This post isn't a brag. It's meant to be another kick in the ass. Hopefully your ass. Decide what your brand of success looks like, grab hold of that anchor you want to believe is around your neck and drag yourself to it.