So, I'm at Chicago SES and see someone tweet about how Google has integrated Twitter into regular search. Sure enough, Search Engine Land has an article about the topic.

Being a former practitioner of the “dark arts”, I immediately start running some searches and was pretty shocked at what I found. Funnily enough, Dave Naylor was giving a presentation and mentioned this new real time search integration (in regards to the reputation management issues it creates). He pulled up the results for his name at the same time I tweeted him to get to the speaker room so we could fool around with what I was seeing.

For the next thirty minutes or so, Dave, myself, Michael Gray and Frank Watson sat around doing a few searches, and we were all a bit surprised at what we found and how Google couldn't have foreseen the problems they've just unleashed.

The most obvious thing was the ability to real-time spam Google's results. A quick search for Viagra showed the real-time results at the very top of the SERP, right under the news results… so I do a tweet about Viagra and drop a link to Sugarrae.com. Sure enough, my tweet and my clickable link show right at the top of the Google SERP. 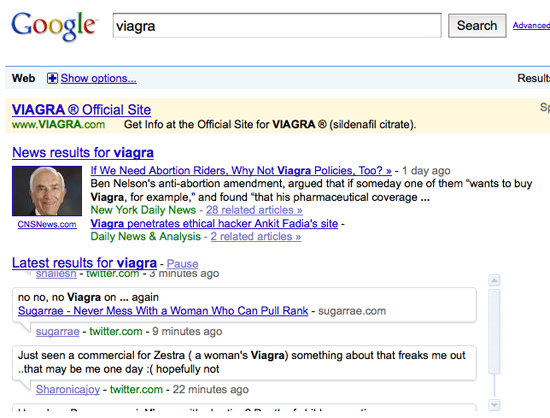 Google pulled the anchor from my sites title tag. Additionally, Twitter hashtags are also clickable. A quick search for Miley Cyrus gives you visibility to her fans if you drop a tweet offering up great Miley Cyrus tickets with a link (however links don't always seem to go through), hashtag or phone number (I actually got two calls after the tweet scrolled by). 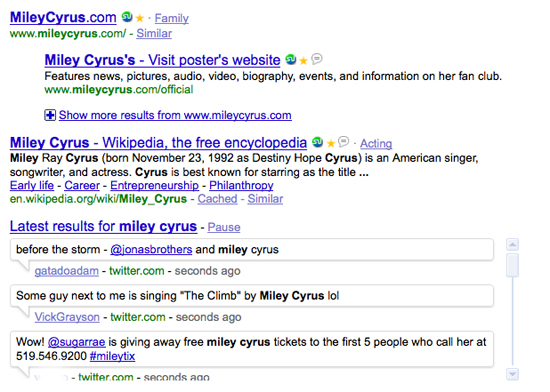 Can you hear the bots churning? I know I can. I can't imagine that Google couldn't have not only foreseen these issues but also had tested their filters much more extensively.

A more obvious danger is the reputation management angle. If you do a search for a person's Twitter handle (we'll use Mike Martin as an example) you'll see not only his tweets but tweets mentioning him. If your Twitter handle is the same as your company name, you suddenly have a real time compliment or complaint feed showing up to anyone who searches your name on Google. (And just think of what this means for keyword-based Twitter accounts.)

Imagine if you have a disgruntled employee who takes to tweeting poorly about your company all day long in a fit of anger. Imagine if your competitor wants to play dirty. There is no way to track who owns a Twitter account, and you may find yourself having to spend a lot of time to try and stop and remove bogus complaints or comments from appearing. By the time you get it situated, the damage may have already been done with no one to hold accountable for defaming your company's name.

I think the aspect of this “real time search” that frankly, scared the hell out of me the most, is the ability for predators to reach out to children with no way to stop them. At this point, I see no way to remove real time search from showing in the results. Safe search, even on the highest setting, to date, does not remove them. Suddenly, anyone can talk to my child while they surf Google.

Let me repeat that.

SUDDENLY ANYONE CAN TALK TO MY CHILD VIA GOOGLE, AND I CAN'T STOP IT.

Google has suddenly become an enabler for predators. Need an example?

Let's say your kid is searching for information on Sesame Street. A wholesome show, right? Right. That is until some freak is suddenly talking to your child and asking him to call them. 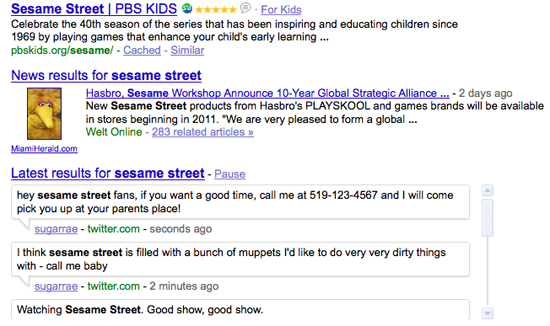 So Michael says to me, “what four-year-old uses the phone”? Ok, let's target your angst filled, misunderstood teen then who is incredibly mad at you at the moment that you won't let her see her boyfriend anymore. She does a search for Miley Cyrus to find “The Climb” lyrics so she can be emo for the night… 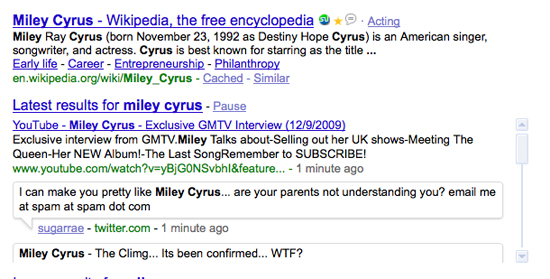 Google has just allowed strangers into my home and given me no way to lock the door, aside from removing my child's access to Google. The default search engine for almost every computer I see, including those in schools.

And this is just the tip of the iceberg folks. Google may think they're ready to deal with the ramifications of personalized search. In 30 minutes time, we were able to find multiple, multiple exploits (much more than listed here, but if I told you about everything, the guys might shoot me).